Following a discussion of available spaces for the summer exhibition, we were introduced to the details of an experimental group tutorial. The idea was to identify a conceptual problem for discussion with two partners. The participants were only allowed to use open questions to force the presenting person to reflect on own practice. This was an excellent opportunity to use the Socratic Approach. My group was very helpful and simply superb. I was able to benefit from both Jonathan’s and Donald’s input and feedback.

I questioned a conceptual cohesion between the painting process and the subsequent washing and erasing of the painterly surface.

My notes are below:

Their commentaries are below:

This is a live experiment and includes BA and MA students, lecturers and a neuroscientist.

Today’s workshop and discussion was led by Roxanne Peters. She is a creative and cultural rights specialist.

There was an exciting debate about sensitivities involved in copy and intellectual property rights in the context of creative practices.

The question for the workshop was as follows:

What is the value of sharing your work on social media?

It was quite amazing to be privileged to see the entire archiving department at the British Library. I had a chance to see the hidden aspects of preserving valuable publications and manuscripts by a team of highly sophisticated individuals. It was clear that the work process of archiving tens of thousands of photographs was very repetitive and mundane. It requires a lot of focus and patience. The team are highly motivated and full of intrinsic energy and passion. Their mission was to create archive files to the best of their abilities – true art forms, as they said.

I was also extremely touched to have my cyanotype experimentation photographed and archived by the team. Thank you ever so much!

This was a fascinating journey through the history of computer generated printmaking. The talk was delivered by a senior curator Doug Dodds and his assistant MELANIE. Both have amazing knowledge regarding the collection at the V&A and far beyond.

The content of the presentation covered a detailed explanation of and discussion about key example of computer generated art going back to the early 60s.

The overall experience was highly informative and truly inspirational.

The workshop was delivered by Dave and Barnie.

Both have an extensive knowledge and experience of working with sound and use sophisticated equipment to fully explore a broad range of opportunities this medium offers.

Following an illustrated presentation of technical and theoretical ideas, we were split into groups of three. The aim was to develop a cohesive sound project covering approximately 2 minutes of time.

I worked with KK and Alexis. Following a debate, we settled down on a concept inspired by the work of Bruce Nauman.

The work process was split into five distinct stages:

2. Composing the text comprising of a list of contradictory words and meanings

4. Editing of sounds and problem solving.

5. Refinement and re-evaluation of project concept, and creative intentions. Critical analysis of our work. 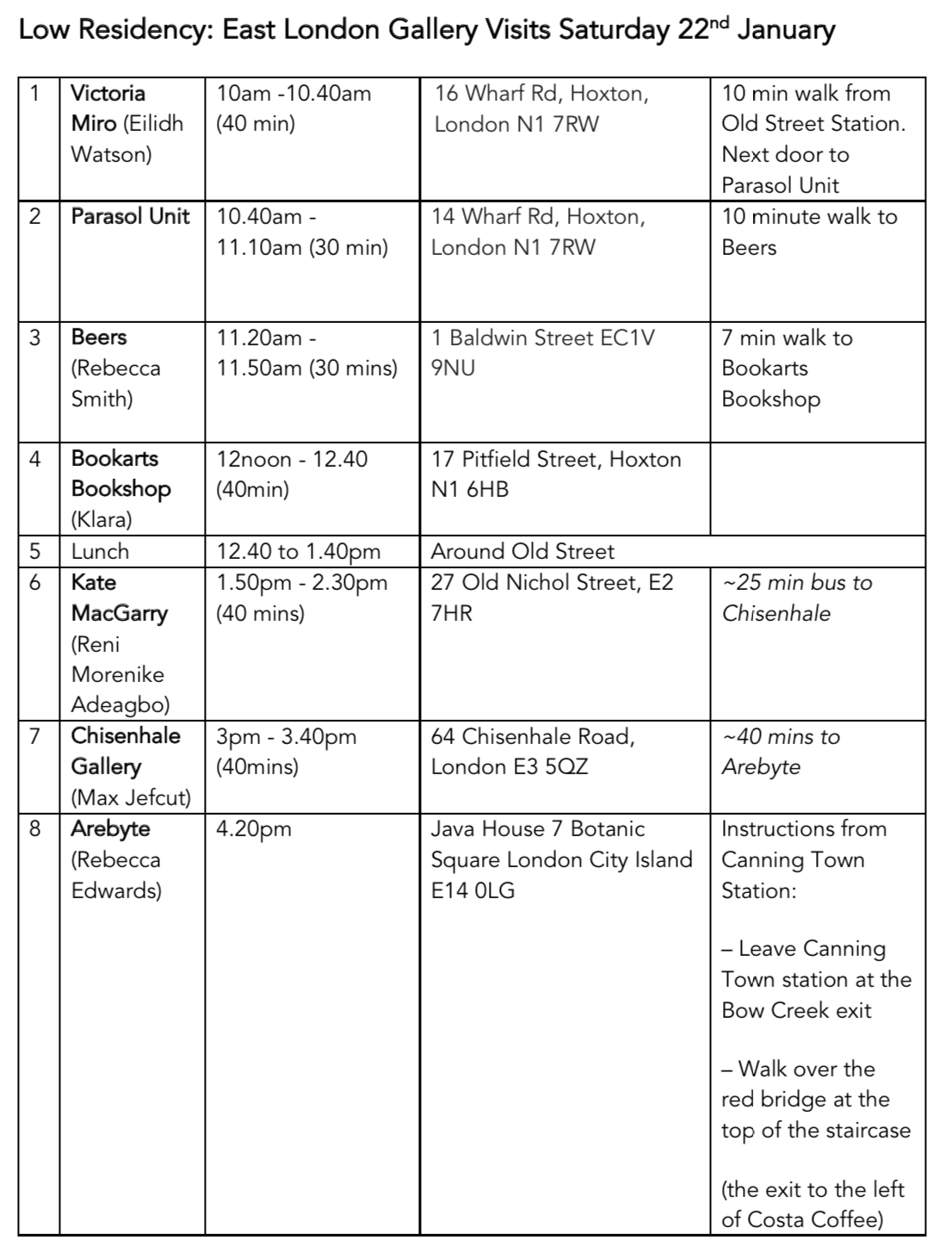 The first exhibition contained a range a highly commercial and very large scale photographs printed on dibond. The detail portrayed was truly and surrounded by a dusk of space. The use of chiaroscuro was absolutely impressive and drew references to the masters of the Renaissance. The show was accompanied by a 20 minute film projected on dual screens. The narrative was set in the context of futuristic space travel and science fiction concepts. 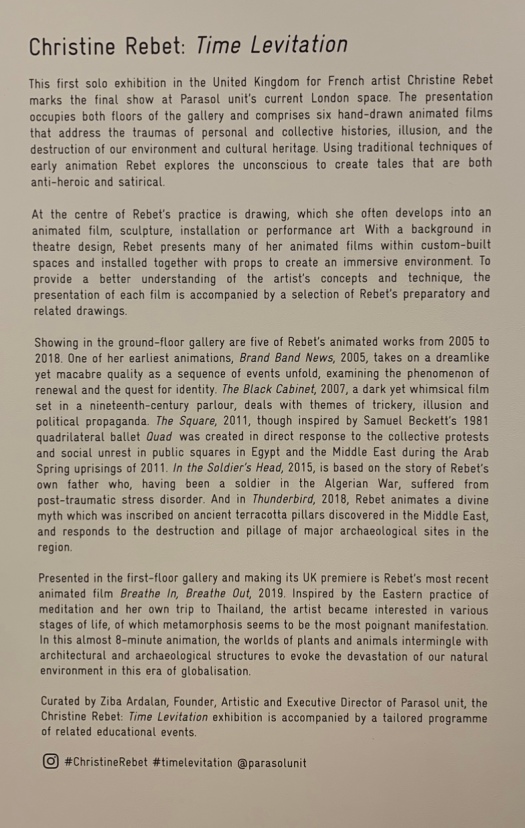 This exhibition displayed a range of drawings, illustrations and animations. The underpinning themes range from a dream like macabre to dealing with post dramatic stress disorder and the Eastern practice of meditation.

This is a joint show between three artists covering a range of fascinating paintings, which question the artist’s identity. There are also intriguing sculptures made from screwed cardboard portraying the human form in great detail and sensitive etchings on paper. 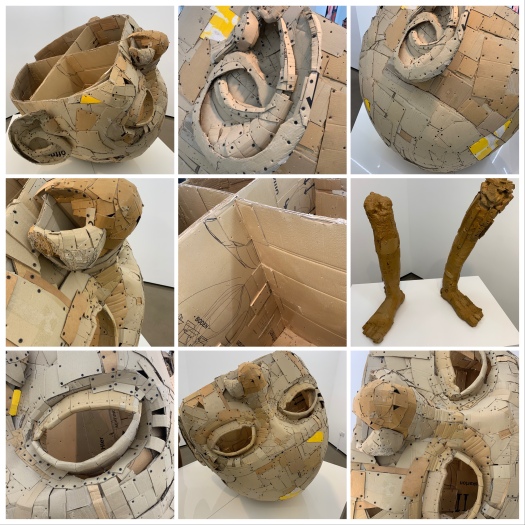 This little book shop sells a range of artists’ and limited edition books. It is very small but stylish and well stocked with original and value items. 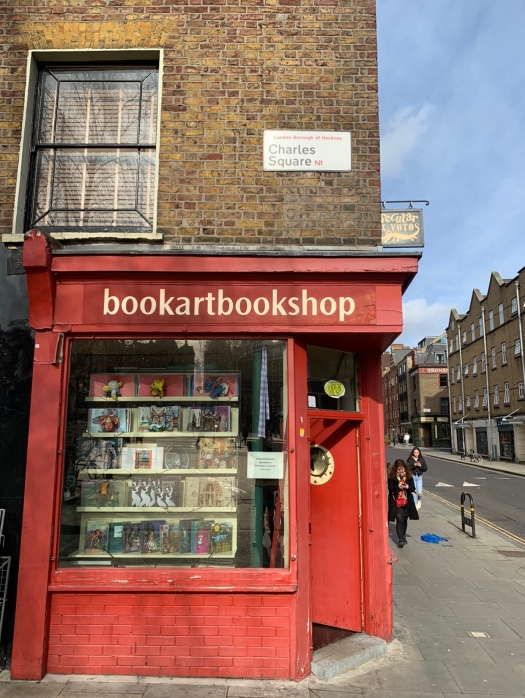 A solo exhibition by Rose Finn-Kelcey portraying her key pieces from the 70’s and 80’s.

Her works comment on different forms of social activism and staged performances. 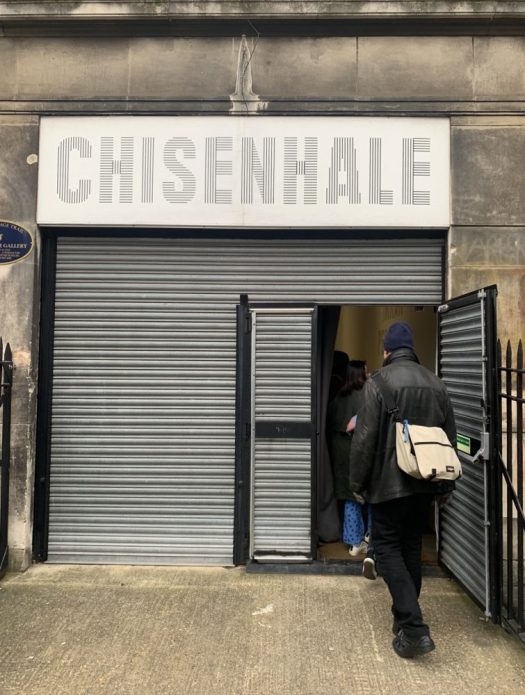 The gallery promotes cutting edge artists from the UK and international. They work very close with artists and offer four commissions per year.

Current exhibition is a 23 minutes film by Imran, a London and Bangladeshi artist. The piece is split into three chapters was shot quite close to the gallery and is supported with a personal narrative.

This a second projection, which I saw today. Both have used a dual screen approach. The idea is that both are projections are separate yet they work together and make a contribution to the holistic image. This allows for the use of mirroring and opens up totally new possibilities in terms of juxtapositioning of exciting angles and viewpoints, frequently contradicting the screens and switching one off.

The seventh and last gallery – AreByte exhibition was based on four, large-scale projections.

Each one was a recording from a different type of art auction. The first was based on prisoners bidding for their time, the second was filmed in a market for the poor, their fire one was recorded during an auction for the wealthy and the last for the upper classes. All projections were triggered by inserting a pound coin into a slot, which was than converted into a cryptocurrency.

The exhibition commented through contrast and compare activity, on uneven money and wealth distribution in the contemporary society.

The filming was focused on the backhand shoes of people in each group category.

Overall, an excellent and thought provoking visualisation of divisions in a capitalist and market driven world. 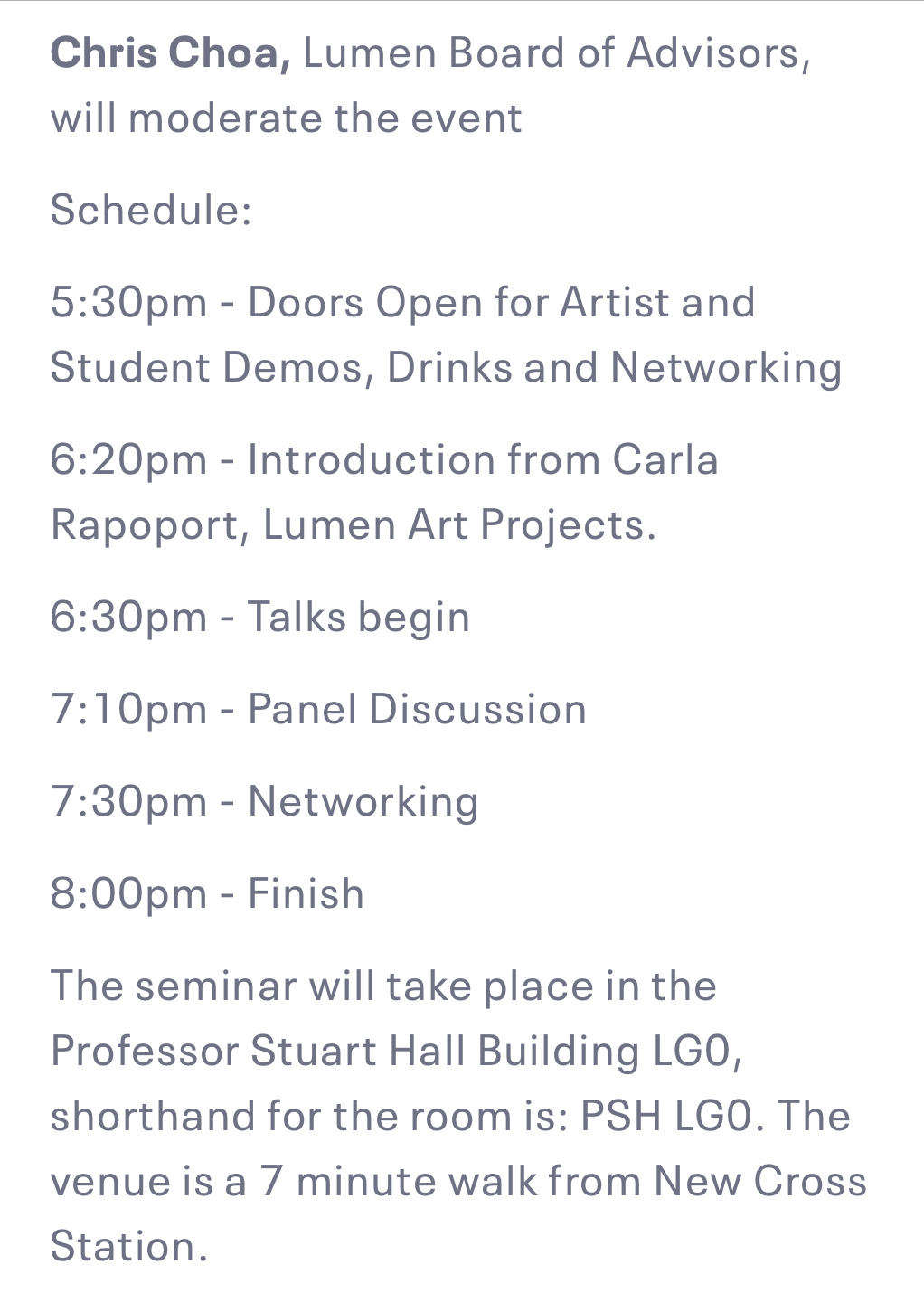 A fascinating and thought provoking evening of presentations by renowned international artists. There is an awful food for reflection and digestion. I feel truly challenged and stimulated to embrace a range of powerful concepts, which were presented during this evening at Goldsmith’s.

This has been a very intensive and exciting day. Matt Edwards, who run this workshop is an expert with a fast knowledge in this area. The purpose was to initiate experimentation with filming and editing footage in an intentional and meaningful way. A strong focus on the overall idea is very important in order to develop a holistic and professional piece.

In order to ensure consistency between individual workshops and experimentation, I have decided to create and record a mini pop-up show of my screen prints.

I used a Nikon D90 camera and a tripod. The idea was to capture a broad view of an art studio. All work in progress provides the frame with detail and sets the seen, while contextualising the video. I practiced with recording myself, while continuously displaying prints on a white wall to form a large rectangular composition. Subsequently, the pieces were removed one by one. White wall as a start and the same white wall as the end. This concept has provided my with the boundaries for my action and narrative.

I have experimented with a range of possibilities and considered a number of unassuming angles for shooting. My creative intention was to ‘go’ beyond a simple use of a documentary or media approach. I wanted to create a short art film.

Simultaneously, this provided me with an excellent opportunity to photograph my prints using a digital SLR.

As soon as all images and video footage are processed, I will include them and other visual material in this post.

Premier Pro is an advanced piece of sophisticated video editing software, which allows for a superb level of control, manipulation and intervention.

To aid my memory, I made a number of notes. I hope to use them as guidance in further experimentation. I am excited about taking my current ideas further and this process will begin shortly.

I feel that I have learned a lot about the impact of colour changes on video and the way in which it is perceived and understood by an audience.

Surprisingly, there is a similarity to how this applies to traditionally developed imagery.

I created a number of clips and sequences and experimented with additional effects including the use of alteration layers.

All in all, the day was very successful and demanding. I have benefitted from being challenged, especially in the context of experimentation and risk-taking leading to the development of new ideas and discussions of alternatives.

I am looking forward to the next stage of refinement of the work, which I have started to produce today.

A screen shot of my notes is below:

To diversify my experiences from last year with mono-printing and etching, I opted for screen-printing.

Following an excellent presentation of technical possibilities, we reviewed an extensive range of examples of prints, covering numerous pieces produced by both, staff and students.

Tony Lee delivered a detailed demonstration of a variety of processes, while discussing alternatives to the time-typical practice. To my surprise, he also gave me all of my prints from last year’s workshop. I was astonished by this amazing surprise! Thank you Tony.

Brian Whitewick introduces us to the technical aspects of coating and developing screens. His knowledge and experience were excellent.

With his help, I was able able to achieve a crisp transfer of my images onto a silk screen.

Initially, I taped a screen and established a form of registration. I used a number of experimental techniques including masking, drizzling and flicking. I dragged the squeegee across and continuously overprinted my under-images with countless layers of harmonious colour transparencies. My creative intention was to achieve a sense of depth of colour and sensitivities of related textures. Subsequently, I used the same images as for the cyanotype workshop and developed both of the on the same screen.

Kaori’s presentation was a very personal review of her own art work and inspirations. To contextualise this and extend our critical analysis of her work, she framed her practice by recollecting several important life events, which were pivotal in the refining of her practice.

She identified the impact of her motherhood, life-threatening illness of her daughter and the recent Tsunami in Japan as the three most remarkable stages in the development of her art practice.

Maori has also elaborated on her broad understanding of her creative practice and identified a number of key components, which make a contribution to the holistic idea of being an artist.