This is quite a new approach to image making for me.  I started by creating a multi-coloured background layer.  This under image was than continuously reworked and refined.  I was using un-primed calico as a background material for this process.

The layers continued to grow and overlay, creating an exciting and dynamic environment.  I felt ready to introduce the Three Monks as realistic characters – right in the middle of the colour composition.

The next stage involved further over-printing and blasting of the new layers away.  I used the previously tested pressure washer and simply rags, sponges and dirty and soapy water working on a horizontally positioned canvas and allowing the water to interfere with the drying paint freely.  This resulted in a number of washes and bleeding of colours.

Subsequently, I started to paint on top of the existing surface using relatively large brushes and a small squeegee.

My intention was to create a sense of isolation and division between the characters and the world.  I wanted for the Monks to become totally oblivious of their external environment.  They appear to be detached from their surroundings and this contradiction echoes the essence of my observations.  The monks are suspended in a hypnotic repetition of their daily task, routines and rituals. They have little understanding of hunger and hardship.  Their entire focus is on how to satisfy the superiors.  Although barefoot, they ware immaculate silk gowns, robes and hats.

The aggressive fight for survival, which is present everywhere around them, is just a distant illusion.  The mundane reality is far beyond their area of interest and abilities to comprehend.  Their lives are artificially sheltered.

A further reflection needs to take place, before I am able to formulate a range of meaningful quality improvements.  The are, however, two immediate tasks ahead of me: 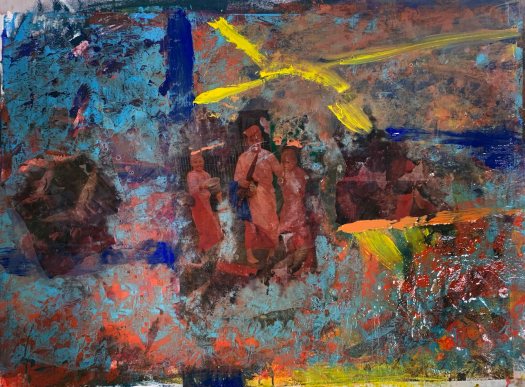 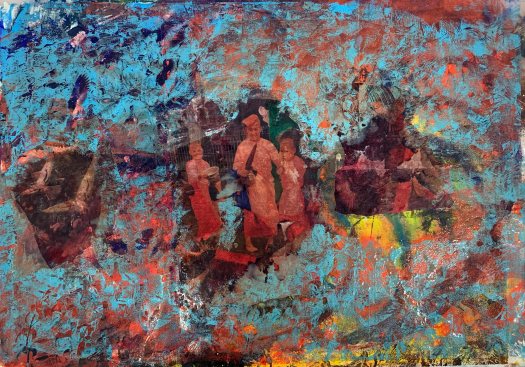